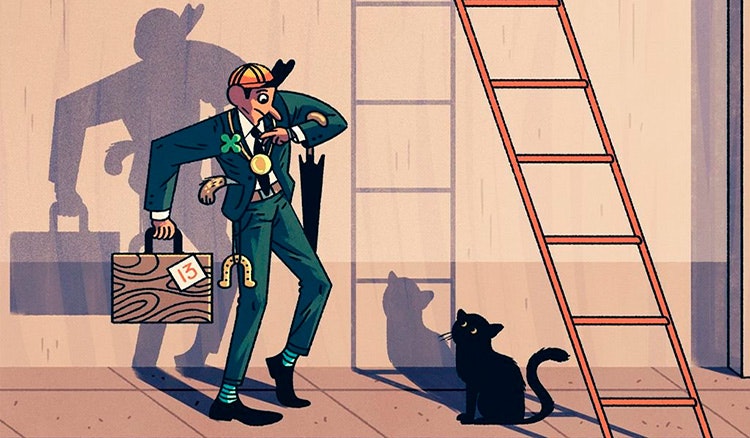 Superstitions are beliefs that many people around the world tend to have that they believe can cause a potential outcome to happen, despite there being seemingly no real logical explanation to suggest why they might.

A classic superstition is that breaking a mirror will cause the individual who did so seven years of bad luck, whilst nobody wants to have a black cat circle them. Indeed, in any walk of life, it seems superstitions will emerge.

There are some who play sports that will become superstitious and decide that they need to do a certain thing before competing, whilst they clearly play a role in gambling, too! In fact, they are rather prevalent within gambling that there are a number of common ones that continue to appear and many feel should be believed.

What are the most common superstitions within gambling?

As mentioned, wherever you look there are a host of different superstitions that exist across a variety of different things. Therefore, it perhaps should not come as a surprise to learn that there is a number that many believe exist when it comes to gambling. But what are some of the classic ones that people follow?

Sitting up straight when at a table

Yes, people believe that sitting up straight when gambling can help bring them good luck and fortune when they participate in a game. The reasoning behind this is due to the fact that sitting upright will improve posture, thus making the body feel psychologically right.

Additionally, it is widely believed that bad luck will be acquired by those who decide to cross their legs whilst gambling as this creates bad posture.

Due to history, many in America believe accepting $50 bills when gambling will bring them bad luck in the future due to the ties it has with the Mafia. The American Mafia would leave a $50 bill in the pocket of their victims when they were buried.

Don’t count money at the table

It is not just gamblers who take this superstition seriously, as there have been cases where some casino establishments have advised bettors not to count money whilst at the table, due to the bad luck that may occur.

Apparently for many, whistling whilst playing a game at a casino might not only be annoying, but it could bring that player some of the worst luck possible. It will not get an individual thrown out, but there will be many that will not approve of the noise.

Wear red if you want to win!

Particularly in Asia, there is a superstition that suggests that wearing red could bring good fortune when wagering. Of course, color is strongly associated with fortune and prosperity in everyday life, therefore it perhaps is not the strangest to have ever existed.

Itchy palms are related to luck

Players in Europe might not follow the wearing red superstition, however, one that they might be more aware of is itchy palms. Apparently, depending on which palm the itch is, this can help to predict what type of luck is going to be had.

Having a “lucky charm”

We all know about having a “lucky charm” as this is something that we have all enjoyed before, but gamblers appear to take this to another level as they are passionate about it. Players can use a variety of different things in order to achieve this, but there is no evidence to suggest whether they have a positive or negative impact!

There are lucky and unlucky numbers

The number 13 is known to be unlucky (and even scary) for many in the West, whilst the number 7 is believed to be the complete opposite. Gamblers in Europe have taken these numbers very seriously when they play their favorite games.

In the East, numbers are everything. Chinese players will look to avoid the number 4 due to how the word is similar to the word ‘die’ in Cantonese when translated. However, numbers 3, 6, and 9 are said to bring good fortune when they have been combined with the number 8.

The superstitions mentioned above are just some of the most common that gamblers will look to try and avoid, although there are a plethora more that can be followed. If you are a superstitious person, it might be best to know about these before playing your next game!