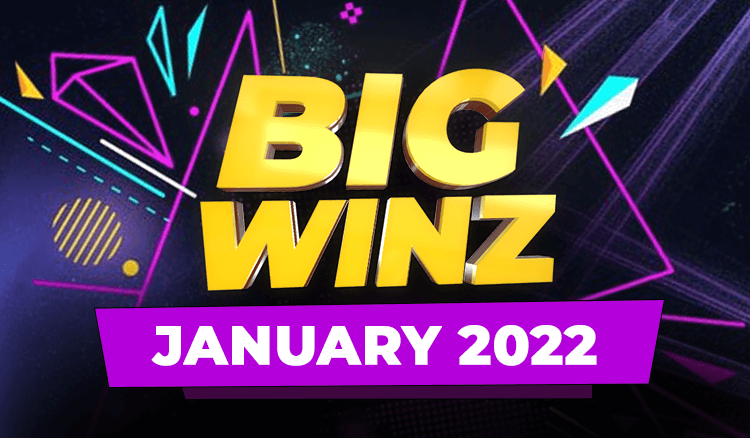 January was a great way to start 2022 for these Winz.io members, as they were each able to enjoy a number of great slot wins in the previous editions of the Lucky Battle Weekly competition!

They each managed to take home a share of the 1800 USDT prize, along with a share of the 500 free spins that can also be won. In order to do so, all they had to do was to play their favorite slots and achieve the largest bet multiplier.

Let’s take a look at those who managed to smash January and head into February beaming! 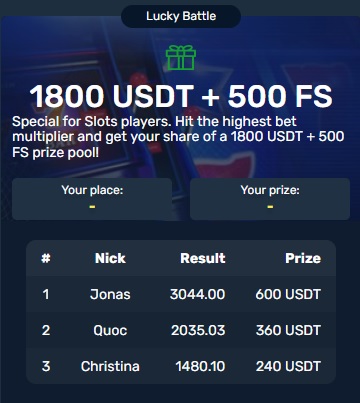 The first week of the new year belonged to Jonas, as he had managed to start 2022 in the best way possible after playing Pragmatic Play’s Piggy Bank Bills! The game certainly made the dollar bills fly, as he managed to turn a 1.20 EUR bet into a win worth 3,652 EUR after obtaining a bet multiplier of x3,044!

Winz.io member Quoc came second in the first week’s Lucky Battle Weekly competition after he turned a 2 AUD bet on Belatra’s Northern Boom into 4,070 AUD with a multiplier value of x2,035.

Christina took third when she managed to turn 0.80 EUR into 1,184 EUR on Red Tiger Gaming’s Jingle Ways Megaways via the use of an x1,480 multiplier!

Miruna found Amatic’s Lovely Lady slot to be rather loving, as it provided them with a payout of 829 EUR after receiving a bet multiplier of x1,658 from a bet of just 0.50 EUR.

Thi thanh saw their 1 USD bet be hit by a win multiplier of x1,547 when playing Yggdrasil’s The One Armed Bandit, thus giving them a payout of 1,547 USD! 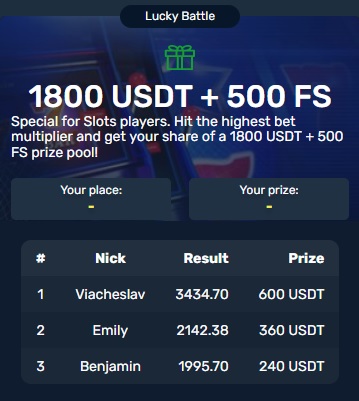 Playing iSoftBet games will certainly have been rewarding in Week #3 for those competing in the Lucky Battle, as two of the three winnings were created when playing the developer’s titles.

Viacheslav was playing iSoftBet’s Greta Goes Wild slot and turned a 28 RUB bet into a win worth 96,171 RUB after obtaining a mammoth multiplier of x3, 434!

Emily had also been playing a game from the same developer to come second, although she was playing Basic Instinct and saw her 0.50 AUD wager be converted by the use of an x2,142 multiplier that provided a payout of 1,071 AUD!

Benjamin – playing Tombstone R.I.P. by NoLimit City – came third in this particular week’s competition by achieving a multiplier of x1,995 and being awarded a prize worth 3,193 AUD when he bet just 1.60 AUD! 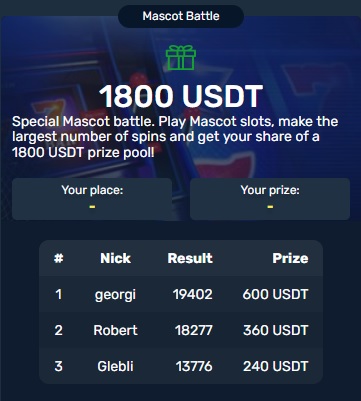 Week #4 was a special week for Winz.io players, as they were able to compete against each other exclusively on Mascot Gaming titles. This week was all about the number of spins that could be made, with those making the most being rewarded with a rather lucrative prize!

Georgi raced away with the victory in this battle, though, as he made a total of 19,402 spins, thus providing him with the reward of 600 USDT! Robert was second as he made 18,277 spins and obtained a reward of 360 USDT whereas Glebli came third with 13,776 spins and a prize of 240 USDT! 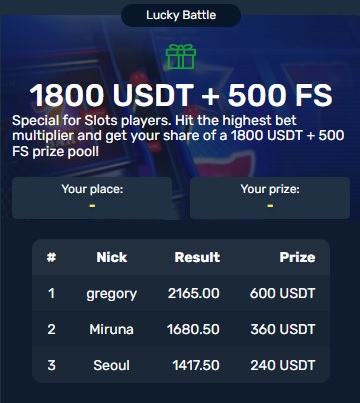 The final week of the January edition of the Lucky Battle Weekly competition in 2022 saw some rather big wins take place.

Gregory managed to take the top prize as he played Big Time Gaming’s Kingmaker Fully Loaded slot and saw his 1 CAD wager turn into 2,165 CAD after a multiplier of x2,165 was hit whilst playing!

Miruna managed to turn a 10 EUR stake into 16,805 EUR when playing Amatic’s Lovely Lady by achieving a multiplier of x1,680 and following on from the success she had in Week #2.

Well done to all of our Winz.io Lucky Battle Weekly competition winners in January and for starting 2022 in the perfect way!

Check back here next month to see who managed to win big in February; perhaps you will be able to make an appearance?