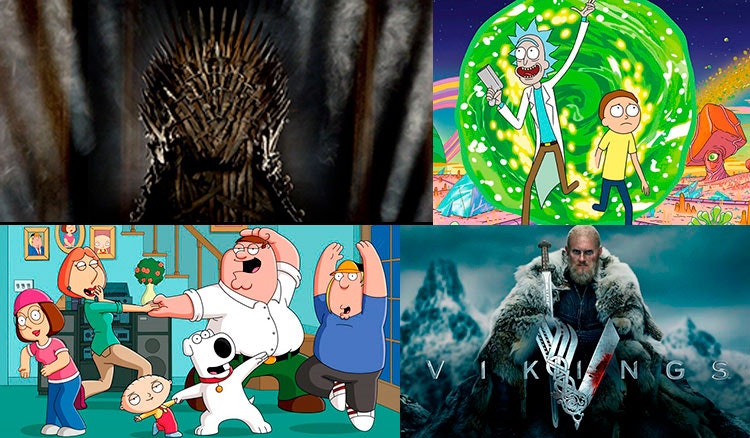 Popular culture has always been a rich hunting ground when looking for themes for online slots and casino games, and throughout the years we have seen some of the biggest and most popular TV shows be given the online slot treatment. Slot games based on TV shows have always been very popular with fans and players, and so here we have some of the best slot games available that are based on your favorite TV shows.

The show Vikings has garnered a huge global following, and it is based on the Scandinavian civilization that grew in fame and fortune between the 8th and 11th centuries. Thus, it is no surprise that there is already a slot game based on this show, brought to you by the excellent game studio NetEnt. It borrows many popular characters and themes from the show, while the middle reel is a Hot Spot that can transform all the icons into the same character if triggered. There is a Shield Wall feature as well that can get randomly triggered on any spin, while landing three shields on the last three reels triggers a Raid Spins bonus game where there are expanding reels and bonus Hot Spots to increase the players’ winnings.

While Game of Thrones may have ended on a disappointing note for fans, with the eighth and final season garnering a lot of negative reviews, there is no doubt that the show has transformed the TV industry, with big-budget productions more often the norm after the example that GoT has set. The show is still considered one of the best TV shows of all time, and thus there have been various other content ideas that have been born from it, including online slot games. The official GoT slot game has been developed by Microgaming, and it is a standard video slot game with either 15 paylines or 243 ways to win, depending on the player’s choice. There are four houses in the game, Baratheon, Stark, Lannister, and Targaryen, with each of them having their own bonuses, ranging from 18 free spins to 5x multipliers to stacked wilds. The fewer free spins available, the larger the multiplier, and vice versa.

One of the most popular shows in recent times has been Rick and Morty. At first glance, one may think that this is a children’s show, since it is an animated cartoon, but it is in fact filled with dark humor and the sort of fantastical storylines which can only make sense to adults. The show is based on an eccentric scientist and his grandson, and their adventures as they travel through time and space. This serves as the basis for the slot game as well, with freaky visuals and sounds, and Blueprint Gaming has done a fine job of providing a similar vibe to that of the show in this game. There are several inside jokes and Easter eggs in the game which fans of the show will appreciate, including an appearance by Pickle Rick. There are three bonus features in the game, all based on the show: Vindicators Free Spins, Federation Wild Spins, and Pickle Rick Free Spins. It is a six-reel slot with 2-7 rows, and with potentially 117,749 ways to win, it can reward players in many ways.

Friends has probably been the most popular TV show of all time, and even today, nearly 20 years after its final season aired, it continues to charm millions of people worldwide. The five main characters – Ross, Rachel, Joey, Monica, Phoebe, and Chandler are iconic, as are several set-pieces and locations from the show such as the iconic coffee shop, ‘Central Perk’, for example. All of these features make appearances on the slot game as well, while there are quite a few callbacks to iconic and hilarious moments from the show that will be well received by fans. The game itself is a 5 reel and 40 payline slot, where players can bet up to a maximum of 100 pounds. With bonus games, mystery stacks, free spins, multipliers, and more ways to try and increase wins, this is one of the best TV show slot games out there in terms of win potential.

The show Narcos became a smash hit upon its release on Netflix, with the first two seasons showcasing the rise and fall of Pablo Escobar, perhaps the most famous criminal of modern times. Subsequent seasons have focused on the drug trade in Colombia after his death, as well as a spin-off that looked the same in Mexico. The fact that the show is almost exclusively in Spanish has not put viewers off, as there have been some superb acting performances. NetEnt’s slot game gives players the chance to experience the streets of Colombia to some extent, with the visuals and icons drawn from the show. One of the most exciting features is the Drive By, where high-paying symbols are all converted into wilds for even better chances of winning big, while free spins are triggered once enough scatters (the car symbols) land on the reels. The Locked Up bonus can give players an instant win of up to 10x of their stake, and so you can see how the game can mirror the way of life in Colombia during that time.

Family Guy has been one of the most popular shows of recent years, with its blend of adult humor and irreverence, coupled with the cartoon animations that have become quite popular with the likes of the Simpsons and South Park. One of the most interesting and fun slot games in recent times has therefore been the Family Guy slot game, created by IGT. All of the show’s main characters appear on the reels, with several of them having bonus features, such as Brian, while Peter Griffin will fart out cash rewards, for example. Stewie can help players pick up extra wilds, while Lois will turn symbols into scatters which could payout up to 1000x of the stake. There is a chicken fight bonus round, where Peter faces off against a giant chicken, with huge potential bonus wins as well to keep you entertained and amused, much like the show itself.