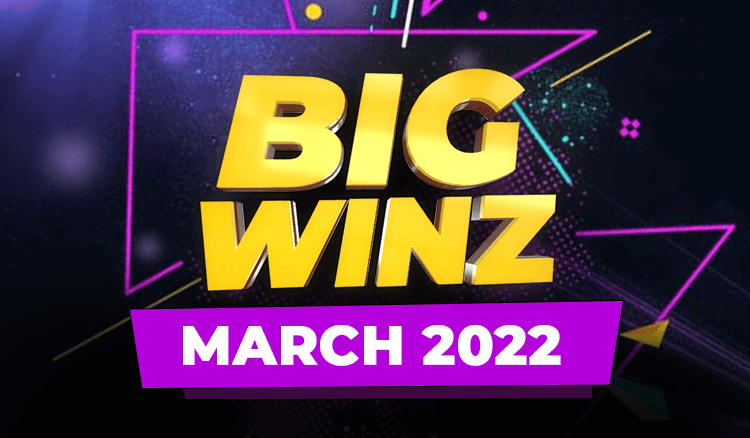 Winz.io members continued to reap the rewards that playing the best slot games can provide them with, as the impressive Lucky Battle Weekly competition continued to roll on!

How did the players get to do this? By simply playing their favorite slots and hoping they were able to trigger the largest multiplier!

Let’s take a look at the winners in March. 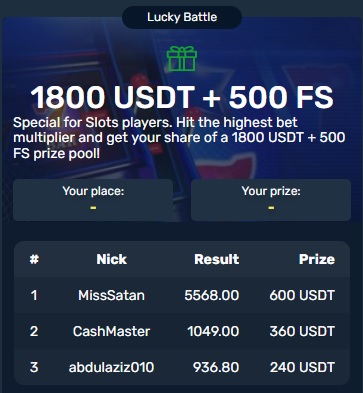 MissSatan was the big winner of the first week of March 2022, as she managed to turn a simple wager of just 1 AUD into 5,558 AUD via the use of an x5,568 multiplier whilst enjoying Nolimit City’s Tombstone R.I.P. slot!

CashMaster finished second as he managed to enjoy a successful time playing BGaming’s Aloha King Elvis slot, and turned a 0.50 USD wager into an impressive 524.50 USD via the use of an x1,049 multiplier.

Abdulaziz010 finished Week #1’s top three as he saw a 1 AUD bet get converted into 936 AUD via a multiplier of x936 when playing Hippo Pop by Yggdrasil! 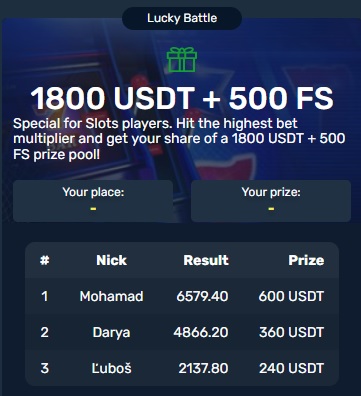 Three new Winz.io members were able to appear at the top of the leaderboard in Week #2 of the weekly Lucky Battle competition, with Mohamad coming out on top! He placed a bet of just 0.50 USD and saw a return of 3,289 USD when playing Relax Gaming’s Helios’ Fury via the use of an extraordinary x6,579 multiplier!

Darya kept the appearances coming for the girls as she managed to convert a 0.40 EUR spin into a win of 1,946 EUR when she played the Wheel of Wonders title by Push Gaming with a multiplier of x4,855.

Ľuboš came third in this week’s competition as he turned a 1 EUR bet into 2137 EUR via an x2,137 multiplier when playing Legion X by Nolimit City. 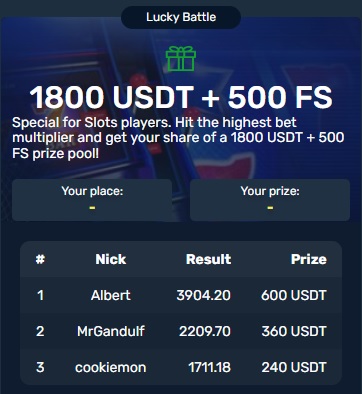 Winz.io players continued to see a number of big wins achieved in Week #3 of this Lucky Battle Weekly competition, with a variety of different titles from different developers all providing interesting results!

Albert was crowned the winner of this edition, as he enjoyed a multiplier of x3,904 when playing Kalamba Gaming’s Blazing Bull 2. He turned 1 USD into 3,904 USD!

MrGandulf also had a good week when playing the Big Bamboo slot game by Push Gaming as he turned a 0.60 EUR bet into a win worth 1,325 EUR via the use of a multiplier worth zx2,209!

To round out the top three, Winz.io user Cookiemon had managed to convert a 1.54 AUD wager into a huge 2,635.22 AUD as he secured a win multiplier of x1,711 when playing one of the top Nolimit City games Tombstone R.I.P.! 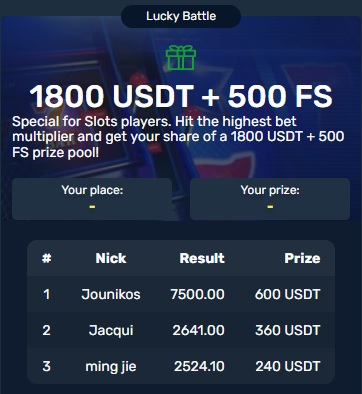 The final week of March’s Lucky Battle Weekly competition saw Jounikos come out on top and take the largest portion of the prizes on offer for Week #4! He converted a 1 EUR wager into a whopping 7,500  EUR after he secured a massive x7,500 win multiplier when playing Wanted Dead or a Wild by Hacksaw Gaming!

Indeed, no one really got anywhere near, however, Jacqui would have been pleased with what she had managed to achieve when playing Nolimit City’s Misery Mining as she turned 1 AUD into 2,641  AUD via a win multiplier of x2,641!

She was almost matched by Ming jie who had seen a wager of 1 CAD be turned into a prize amount of 2,524.10 CAD when they were playing Razor Shark by Push Gaming, thus becoming the final winner of Winz.io’s March competition!

Clearly, there are a number of congratulations in order, especially for all of our players who were able to win huge amounts and come out on top in March’s Weekly Lucky Battle competition!

Do you think you can get a win multiplier as large as Jounikos did?! Why not try and do so throughout April and see if you can win the top prize too!