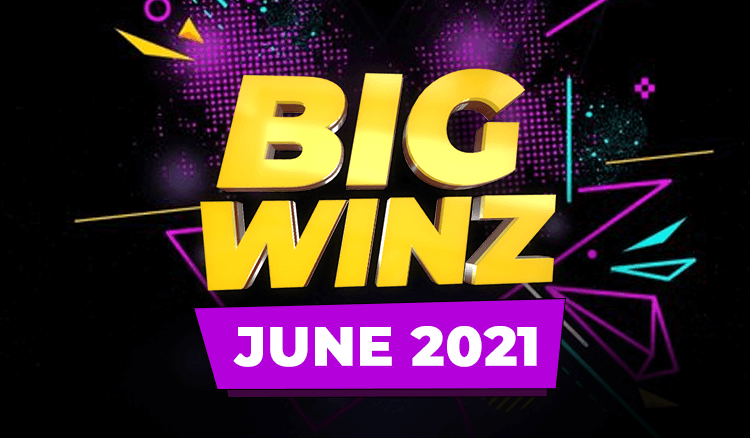 The summer vibes bring us to another Lucky Battle digest where we share all the crazy slot wins happened in June 2021 at Winz.io casino. The Lucky Battle is a weekly competition, where you need to hit the biggest bet multiplier to win a prize. As always, all the prizes are paid in real money with no wagering requirements or any other restrictions.

This tournament not only rewards the luckiest players but also highlights the most thrilling bets and generous slot games during the month. 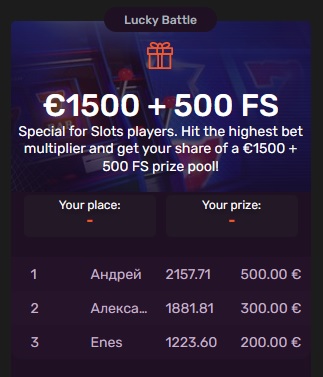 The winner of the first Battle of the month Andrei was fortunate to hit the x2157 bet multiplier in a Mystery Museum by Push Gaming. His initial bet was only 50 RUB with a total outcome of 107,885 RUB. Congratulations! 500 EUR for the first place of Lucky Battle is going to be a nice addition to that win!

Aleksandr claimed the second prize of the week – 300 EUR! He achieved that by hitting the x1881 multiplier in the Fast Money slot by EGT. The amount of bet was 50 RUB and 94,090 RUB were credited back to the balance after this lucky spin.

The third winner this week Enes was awarded with a 200 euro wagering free prize. His crazy win happened in a Wild Chapo slot by Relax Gaming. With a bet of 5 EUR and x1223 multiplier, the winning amount was a booming 6,118 EUR. 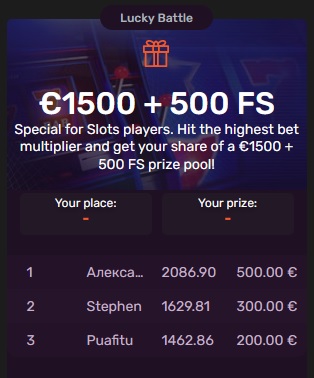 The biggest bet multiplier of x2086 happened this week in Cheese Megaways slot by iSoftBet. Aleksandr has made a bet of 70 RUB and won 146,083 RUB after a single spin.

Stephen was playing The Magic Cauldron – Enchanted Brew by Pragmatic Play when the multiplier of x1629 caught his 1 AUD bet, resulting in a 1,629 AUD win.

The third winner of the week is Puafitu, whose 1.5 USD initial bet turned into 2,194 USD after hitting the x1462 bet multiplier. This happened in a Candy Tower slot by Habanero. 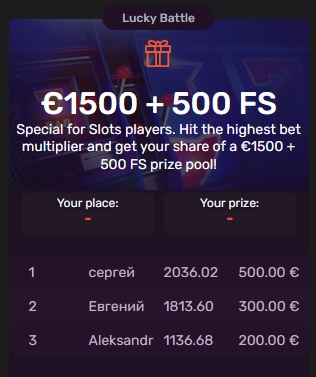 This week the luckiest spin happened to Sergei, who was able to catch the x2036 multiplier in the Iron Bank slot by Relax Gaming. His 20 RUB bet turned into a huge 40,720 RUB win.

Evgeni has made a 40 RUB bet in a Maradona HyperWays™ slot by GameArt. Did he expect to hit the x1813 multiplier and win 72,544 RUB? With an additional Lucky Battle prize, his expectations were even more exceeded.

The multiplier of x1136 in a Mystery Museum slot by Push Gaming allowed Aleksandr to get to the third place in the Battle. His lucky bet of 20 RUB after that spin resulted in a 22,734 RUB win. 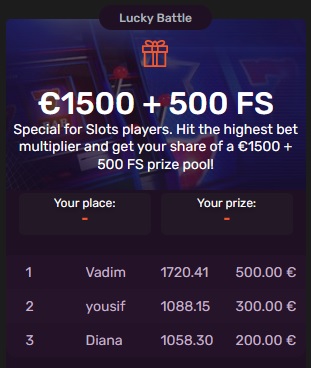 Razor Shark by Push Gaming became the top slot for Vadim this week, as he was able to turn his initial bet of 20 RUB into 34,408 RUB win after hitting the x1720 multiplier.

Diana was playing Reactoonz 2 by Play’n GO when her bet of 1 USD turned into 1,058 USD after catching the x1058 multiplier.

Most Popular Slots in June 2021

Congratulations to our winners! The new Lucky Battle starts every Monday, so don’t miss your chance to earn extra on your crazy slot wins! Not sure what’s the best game for you? Here is a list of the most popular slots at Winz.io Casino in June 2021: