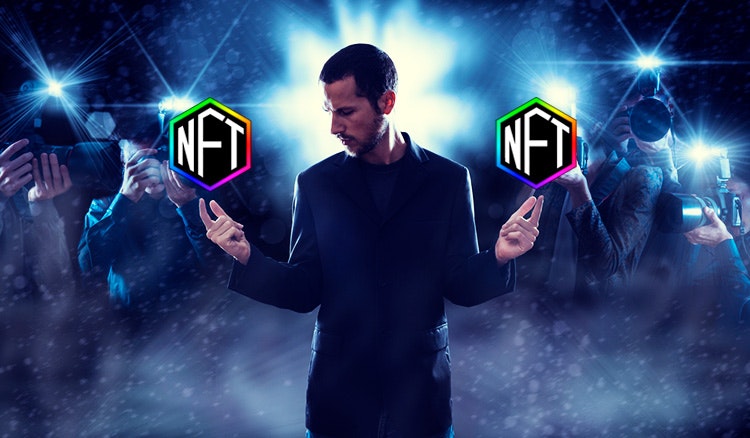 The latest cryptocurrency trend taking the world by storm is non-fungible tokens (NFTs). NFTs are all the rage online in the sports, entertainment, music and art spheres, with a number of well-known influencers and participants in these spaces coming forward to promote this new innovation. NFTs have the potential to completely change the way online sales and revenue sharing takes place, and so it is understandable that it has garnered so much attention. They are being used to sell everything from the likes of artwork to music albums and game items, and we will now take a look at some of the most influential and famous people who have jumped onto this bandwagon to launch their own NFTs or support the trend in general.

Snoop Dogg has been one of the most popular names in the crypto revolution over the last few months, so it is no surprise to see that he has also entered the NFT space. The rapper released a collection, known as ‘A Journey with the Dogg’, through an NFT, which features his memories of his childhood and early career, an original track called ‘NFT’, exclusive artwork, and Snoop Dogge Coins, in a homage to the Dogecoin cryptocurrency. This collection was launched on April 2nd for 24 hours only.

Grimes is a pretty successful musician in her own right, but has perhaps become more famous as Elon Musk’s girlfriend. Her NFT was one of the most successful ever, as a collection of songs with her brother. Mac Boucher, packaged into 10 NFTs, raised nearly $6 million in under 20 minutes of being launched. The package also featured exclusive art that is in keeping with her dystopian style.

The rock band became the first outfit to launch an entire album through an NFT, with their newest offering, ‘When You See Yourself’, being put on sale through an NFT, along with exclusive artwork, merchandise, a lifetime ticket to one show of every Kings of Leon tour, and other goodies. This NFT was also extremely successful, having raised over $2 million so far, and the band have donated over $500,000 of that money to a charity that is supporting out of work technicians, artists, musicians and others who have been hit by the lack of live music concerts and shows over the past year due to the ongoing pandemic.

The former Disney child star minted her own NFT on Rarible back in February, which raised over $50,000. She has also recently released a new song, ‘Lullaby’, as an NFT on the Fansforever platform, with the NFT version coming with exclusive visuals.

The four-time Super Bowl champion is one of the first sportsmen to catch onto the NFT trend, having rolled out five digital trading cards on the OpenSea platform as an NFT last month. They were sold for a whopping $1.6 million, in Ethereum, no less, which means that their value is likely to keep increasing if this current crypto rally continues.

UFC Heavyweight champion Francis Ngannou is another sportsperson who has made use of NFTs recently, having sold $580,000 worth of tokens following his title fight against Stipe Miocic. Interestingly, this sum is more than his guaranteed purse from the fight – $500,000 for knocking out his opponent, plus a $30,000 sponsorship bonus, which shows the incredible potential that NFTs have to increase earnings massively for content creators.

3LAU is a producer of electronic music, or EDM, as it is popularly known, and he raised $11.8 million through an NFT in the space of 24 hours in February by offering an exclusive track to fans.

The American rapper Soulja Boy, who is still famous for his song ‘Crank That’ which came out 14 years ago, followed Dorsey’s example by putting up five of his tweets on sale as an NFT a few days after Dorsey’s auction. A signed copy of his first tweet was sold for $1,288.