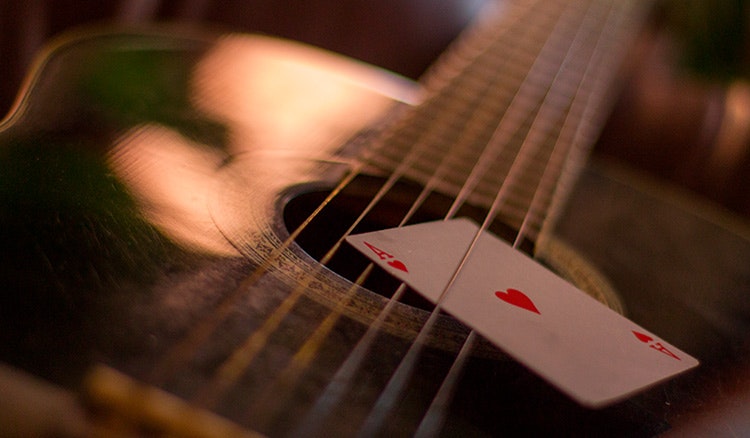 The popularity of gambling can be gauged by the fact that it has usually been one of the most commonly used topics or inspirations for popular culture, including movies, TV shows, and of course, music as well. There are so many classic songs that are about gambling in some way or the other, so here are some of the best and biggest tracks by various musicians that reference gambling.

Waking Up In Vegas – Katy Perry

One of the most famous sayings about Las Vegas is ‘What happens in Vegas, stays in Vegas’. That is probably the reason why Vegas is often the scene for crazy and unbelievable instances in the lives of many people, and that is exactly what this song by Katy Perry is about. The song talks about a young couple who wake up hungover in Vegas one morning and are trying to figure out the events of the previous night. This is actually quite a common theme with visitors to the city, often with hilarious or even serious consequences, based on how much money was lost or whether you ended up accidentally-on-purpose marrying someone.

This is a completely different genre of song to the previous one. Where Perry’s song was a pop track, this is all out heavy metal, but pays homage to gambling, with a reference to one of the most famous cards in a deck of cards, the ace of spades. There are a number of gambling themes and references throughout this classic track, which is easily one of Motorhead’s most famous songs.

Kenny Rogers is one of the most well-known country music artists, but you would not usually expect a song about gambling from a country artist. Nevertheless, this is a beautiful song by Rogers, which is not just about gambling, but also about life in general, as it talks about when to take risks and when to hedge your bets in life itself as well.

This song was arguably the one that catapulted Lady Gaga into the public’s eye, not just in the USA but globally. The references to poker are littered throughout the song, but again, it is not just the hugely popular card game that is being thought about – she also talks about being two-faced in life and putting up a barrier for people in terms of her ‘poker face’. This song is still probably her most famous work, even after all the success she has had.

Shape of My Heart – Sting

Sting’s usually known for his love ballads, and this is no different, but it is rather about a poker player who does not care much about winning or losing – he just wants to beat the game rather than wanting the money itself. Again, there is a deeper meaning to this song as well, but the gambling references are quite visible and obvious.

The Angel and the Gambler – Iron Maiden

Another classic heavy metal song by arguably one of the greatest bands in history, Iron Maiden. This track was released more than 20 years ago, in 1998, and it talks about the hold that gambling can have on someone’s mind. It remains hugely popular, especially among fans of the band, and there have even been instances where some keen listeners have chosen to interpret the song’s lyrics as being a cry for help by the band members, who were supposedly in the grip of various addictions. This has never been proven, but it does not matter, since it is an excellent song by a truly brilliant band.

It seems as though heavy metal is particularly attractive as a genre for songs based on gambling, since this is another one by yet another classic band, Megadeth. The theme of this song is around the consequences that excessive gambling can have, not just for the individual but for society as a whole.

No list of the greatest songs based on gambling can be complete without the King and his song, ‘Viva Las Vegas’. This is probably the unofficial anthem of the city, given how popular it is, and how Elvis sings about various casino games such as blackjack, poker, roulette, and so on, and how night can turn to day in Sin City while you are having fun at the tables. Oddly enough, this song was not very popular when it released, but gained acclaim as time went on.

The Winner Takes It All – Abba

Swedish pop group Abba was one of the most iconic musical outfits of the ‘70s and ‘80s, and this song is one of their most famous ones, more for the backstory than the song itself. The term ‘winner takes it all’ is apparently a gambling reference, but also refers to the divorce between two of the band’s members, and how that left one of them with nothing and the other with everything.

This name actually came about after Mick Jagger consulted the band’s housekeeper, who told them all about the intricacies of the popular casino game craps.

Cryptocurrencies could be crucial to online gambling in 2021

The future is already here: how AI is transforming online casinos