Elon Musk and his influence on cryptocurrencies 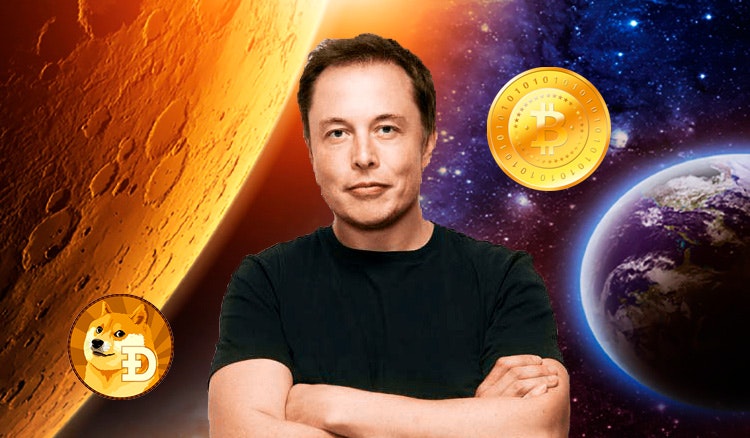 One of the most notable things around the rise of cryptocurrencies over the last year or so has been the influence that various celebrities and influencers have had over the market. The cryptocurrency market is extremely volatile, prone to large price swings in the span of a few hours, and a large reason for this is that the market reacts to statements and actions by those who are considered as influential in the crypto space. One of the most important and influential figures in this regard has been Elon Musk, the CEO of SpaceX and Tesla, among other companies. Musk has long been a champion of cryptocurrencies, advocating for their adoption, and putting out various statements and tweets that have sent crypto assets soaring. However, this enthusiasm seems to have cooled a little in recent weeks, with the result that the crypto market is now in a downtrend, based on comments made by him on television, as well as a decision by Tesla. While we will look at these actions in more details, it has never been more evident that the South African-born entrepreneur has a huge influence on the crypto market, which is an uncomfortable situation given his own crypto holdings as well as those of his companies.

Musk’s support has largely been lent to Bitcoin and Dogecoin, while he has supported the crypto industry in general. While Bitcoin is well-established as the largest cryptocurrency in the world, Dogecoin, which is a take on the ‘doge’ meme, has been one of the fastest-growing cryptocurrency tokens in the last few months. Musk has frequently tweeted in support of both these tokens, which have usually resulted in their prices increasing at a rapid rate for the next few hours. However, he recently appeared on the American TV show ‘Saturday Night Live’, where, during one of the segments, he called Dogecoin a ‘hustle’. This sent Dogecoin spiralling – the token was down by nearly 30% in just a couple of hours after the show aired, and it was quite a disappointment for crypto enthusiasts, who had been waiting in anticipation to see what Musk would have to say about cryptocurrencies during this appearance. This is quite the comedown for Dogecoin, which has previously surged on the back of Musk’s cryptic tweets of support. The currency was up by nearly 7000% this year at one point, and while it is still significantly higher than where it ended 2020, it seems as though a lot of its momentum has been lost after this incident. It is also interesting to note that amidst all this, SpaceX recently announced a lunar mission that would be funded completely by Dogecoin, in another show of support for the cryptocurrency which had a positive impact on Dogecoin’s price. The Geometric Energy Corporation has commissioned this mission, called DOGE-1, with a 40 kg payload to be flown on SpaceX’s Falcon 9 rocket. The payload will have sensors and cameras on board for integrated communications and computational systems, and this mission will “demonstrate the application of cryptocurrency beyond Earth orbit and set the foundation for interplanetary commerce”, according to Tom Ochinero, SpaceX vice-president of commercial sales.

Another example of his influence has come through Tesla, the autonomous car manufacturer of which Musk is CEO. Bitcoin received a big boost in February when Tesla announced that it had bought $1.5 billion worth of Bitcoin, and that it would now begin to accept Bitcoin from customers as payment for its cars. This made it one of the biggest companies to accept cryptocurrency as payment, and helped provide a level of legitimacy to cryptocurrencies. However, last week, Tesla suspended vehicle purchases via bitcoin, citing concerns over the increasing use of fossil fuels for bitcoin mining. This has been a general concern around cryptocurrency mining for a long time now, as it is extremely energy-intensive, and this has led to questions around the use of fossil fuels for crypto mining removing the benefits of using renewable energy all around the world. Tesla’s status as the world’s biggest electric car manufacturer was directly in opposition to this, and therefore it needed to distance itself from cryptocurrencies in light of these rising concerns. However, there have been questions raised around these actions, as some people believe that this is just a ‘pump and dump’ strategy by Musk and Tesla to increase the value of their Bitcoin holdings before selling them. Musk has clarified in a tweet that Tesla has not sold any of its Bitcoin yet, but again, this episode is another example of the large influence that Musk has on the crypto industry and the price movements of various crypto assets.

Cryptocurrencies are accepted as being extremely volatile, but it is rare that an asset class is so influenced by the actions and statements of one individual.