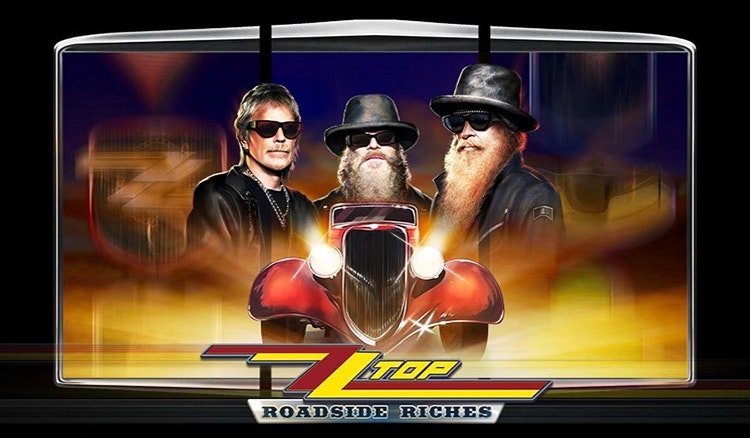 The legendary rock band, ZZ Top, has been given the rockstar treatment in the video slot game world, as Play’n GO has developed a title that pays homage to all that they managed to achieve when they were at the peak of their musical careers. Having recently been released and made available to play ZZ Top Roadside Riches where players are able to play with a range of different virtual currencies such as Bitcoin, those that do decide to hit the road with the rockers will find that they will be jamming to some of the iconic hits that were produced by the bearded musical stars!

As the game’s title infers, Play’n GO has adopted a theme within this game that will see players go on a road adventure with ZZ Top, as the background of this slot game shows a road that appears to be running through the middle of a desert, with neon signs, classic cars and a traditional American-style building also being depicted to the right of the playing grid. The symbols that are available on the paytable of this ZZ Top Roadside Riches slot game also do well to fit in with the theme adopted, although that does not come as a surprise with this particular developer. There are playing card suit symbols that are brightly colored, whilst these are then followed by a cattle skull, sunglasses and the three members of the iconic rock band. Billy Gibbons, Dan Beard and Dusty Hill will each appear as two-high icons on the reels, with each paying the biggest rewards when 5-of-a-kind is formed on a single spin.

This ZZ Top Roadside Riches slot game is an easy title to play and is suitable for bettors of all levels, as it follows a rather traditional format. The playing grid consists of 5 reels and 4 rows, although there are a whopping 1,024 different ways to win possible. Play’n GO has made this game available to play for as little as 0.20 per spin, although a maximum bet of 100 per spin was made. The return to player (RTP) rate is 96.2% and comes with a very high volatility level.

Perhaps the best part of this ZZ Top Roadside Riches slot game is the number of different bonus features that are available to trigger. There are four different games that can be activated, whilst there are also two different wilds also available in the game that can help to boost wins accordingly via a method of substitution. These wilds include stacks and multipliers.

However, it should be noted that these two bonus features can not work together in the base game, but could potentially be triggered on the same spin in the free spins game!

Arguably, the best ZZ Top Roadside Riches bonus feature made available in this game is the Free Spins game, as it comes equipped with two different features. Players will need to land between 3 and 5 of the ZZ Top logo icons, as these are the game’s scatters. Depending on the number landed, a random number of free spins will be awarded, with the following breakdown:

As mentioned, players who are able to trigger the free spins feature will then have the chance to pick from two different features:

As can be seen from this ZZ Top Roadside Riches slot game review, Play’n GO have provided players to be able to rock out to some of the legendary tunes that the iconic band has made, all the while being able to win some potentially lucrative prizes via the use of the extraordinary bonus features!

What is Taproot upgrade and what it means for Bitcoin